What technology will be used for the project?

All three top turbine suppliers – GE, Siemens and MHI-Vestas have commercially available offshore wind turbine generators (OWTG)s larger than 8 MW, with GE leading the industry with a 12 MW turbine.  A number of floating support structures, are expected to be available for commercial use at the time of the project construction, estimated to be in the 2023 time-frame. 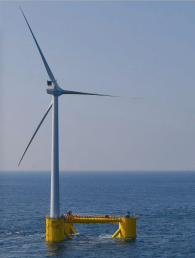 The Hywind, outfitted with Siemens 2.3MW OWTG has been in operation since October 2009 (Figure 1) off the coast of Norway.  In October 2017, Equinor completed installation and commissioning of the Hywind SCOTLAND pilot park consisting of 5 OWTGs, 6MW each (https://www.equinor.com/en/what-we-do/new-energy-solutions/our-offshore-wind-projects.html).

The WindFloat (Figure 2), outfitted with Vestas V-80, 2MW OWTG, has been in operation since October 2011 off the coast of Portugal.  Principle Power is installing a 25MW project in Viana do Castelo, Portugal that will see deployment of 3 to 4 MHI-Vestas 8MW OWTGs in 2019 (https://www.4coffshore.com/windfarms/project-dates-for-windfloat-atlantic-(wfa)-pt03.html)

How do the floating offshore wind systems weather storms?
How large is the site area and is there an exclusion zone?